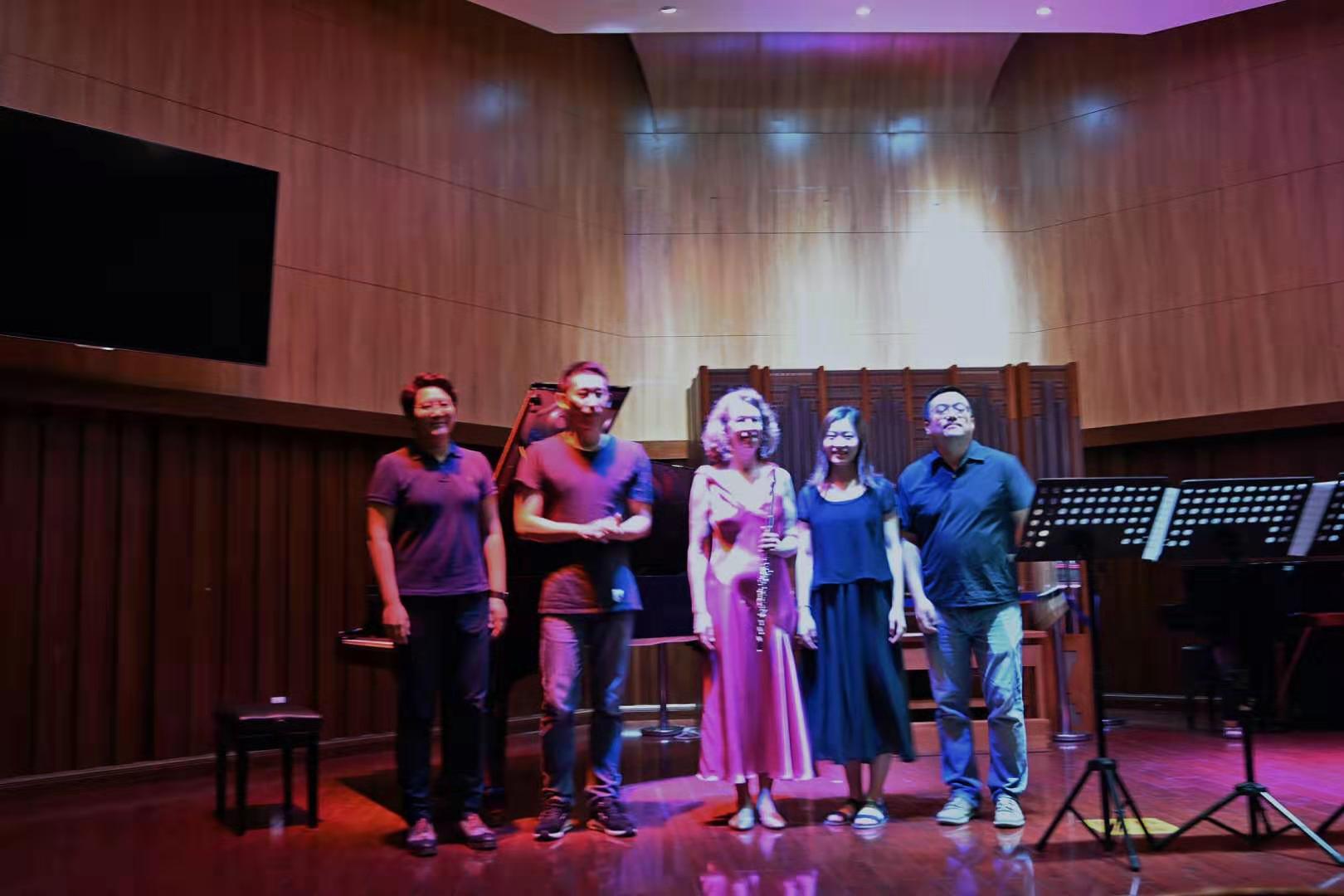 Tumbleweed, Moaning, Silence and The Shadow of Flowers: the scheduling of this two-year project
was extremely fortuitous, though of course I didn’t know this at the time. The first step, a recital and
workshops at the Shanghai Conservatory, was in 2018; the resulting world premieres of the works in
the title above were in September 2019. Subsequent video recordings at Judith Neilson’s White
Rabbit Gallery of Chinese art in Sydney added another dimension and with the filming taking place in
late January 2020, was also fortunately timed, being just before the new coronavirus sent panic-
waves around the world.

The timbral colours in Xu Yifan’s ‘Tumbleweed’ are strikingly original. Xu Yifan’s combining of air
sounds with vocal cavity resonance allows him to create an imagery-rich aural landscape. Pitch
contours fly by, demanding bursts of extravagant virtuosity. The music suggests a lonely, windswept
desert landscape, both in the physical sense and also in the emotional sense, though the latter
suggestion is of course entirely dependent on the listener’s individual perspective and indeed there
is nothing explicitly stated on the score (that would be all too obvious and perhaps unwise).

Anwar Wajidi’s ‘Moaning’ is a work of gestural sophistication, where the “promise” of typical flutey
gestures is cleverly subverted. The result is a work of significant eloquence. There are of course
possible subtexts, as with any non-narrative work, but again that’s open to individual personal
reaction. ‘Moaning’ is a lovely work to play: breath intake is easily accommodated, all the Extended
Playing Techniques work well, and the unusual evolution of the musical material readily captures our
aural imagination.

The Shadow of Flowers by Shihui Cui

Shihui Cui’s ‘The Shadow of Flowers’ is a reimagining of traditional Chinese folk music, with highly
decorated melodic lines, some of which are reminiscent of the Paris Conservatoire pieces with the
addition of idiosyncratic flavours. Its six minutes take us on a pensive wandering into a world of
delicately shimmering colours.

Lanqing Ding’s ‘Silence’ is a homage to John Cage, with a duration (optimally) of the
famous/infamous 4’33”, with the pitch material centering progressively around c, a, g and then e.

Ding has deftly explored the combination of prepared piano sounds and a wide range of the flute’s
Extended Playing Techniques. She creates some beautifully intricate rhythmic and tonal effects,
interspersed with expectant silences. This work is the only one of this group for flute and piano. The
use of prepared piano brings with it the usual logistical restrictions (“not on the Steinway/Fazioli!”),
so there is no video of this work yet but there is a recording on Soundcloud which I’ll link below.

Actions whose outcomes are unforeseeable are explored in this piece.

I can’t conclude this without mentioning another significant work which I was fortunate to be able to
perform together with those above: a long-awaited solo flute piece by the magnificent Australian
composer of long-standing and broad international recognition, Liza Lim. Lim has been an inspiration
to the Shanghai composers and to others around the world.

Her ‘bioluminescence’ is a profoundly imaginative and multi-dimensional work:
“bioluminescence… a living light the camouflage of counter-illumination”

‘bioluminescence’ was written for the Australian flute player Paula Rae who premiered it in Taiwan
in May 2019. The score is published by Ricordi Milan.

Thank you to Kee Yong Chong for recording the performance which is linked above. I must admit
that I didn’t know the work of Kee Yong Chong before meeting him in Shanghai in 2019.

He has written extensively and sensitively for the flute in various settings, and I hope to find opportunity to explore his work more thoroughly in our new post-Covid world.
https://chongkeeyong-studio-c.com/biography/