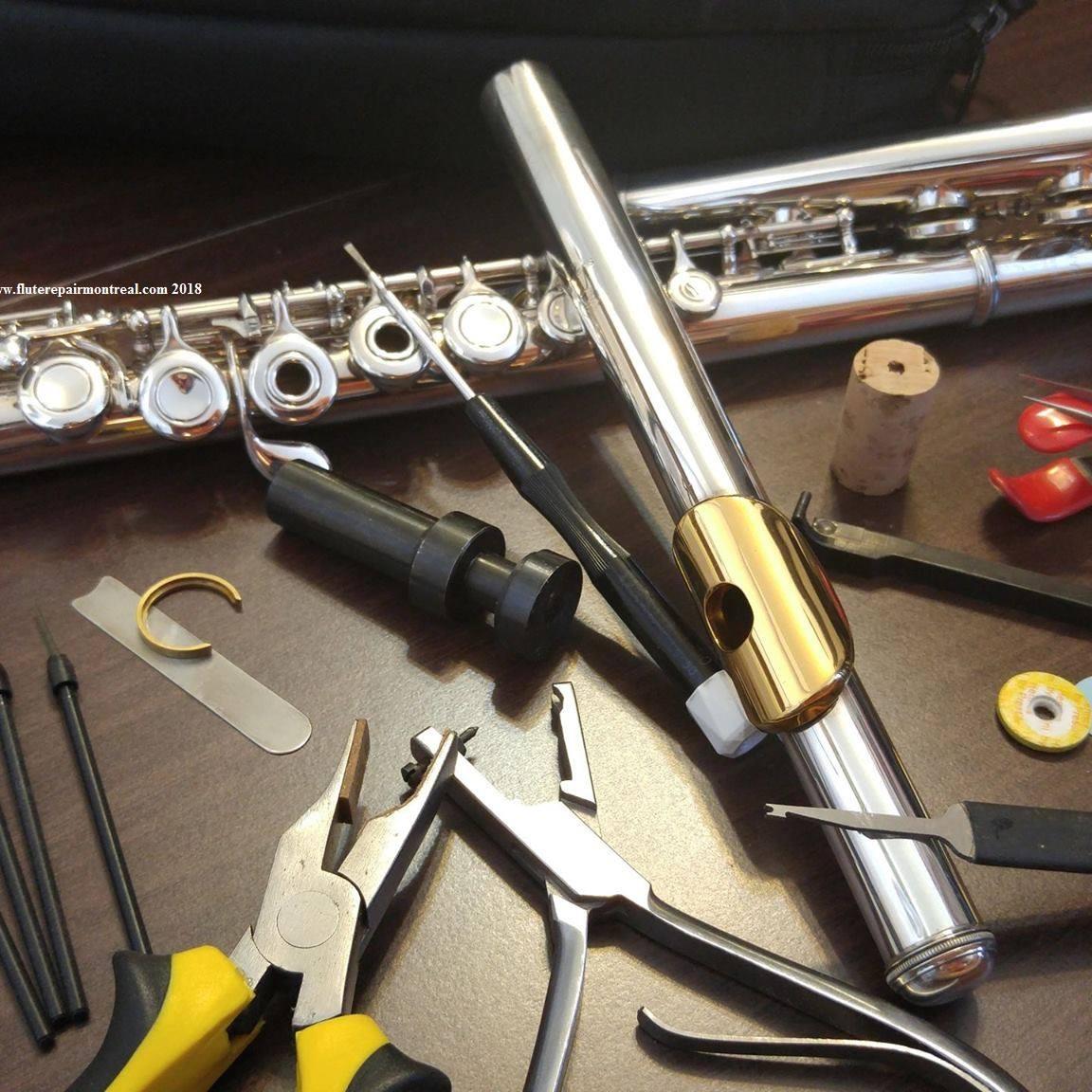 Why the flute needs so much maintenance and repair?

A pianist needs a piano technician only when the piano gets out of tune. A guitarist meets with a technician only to fix a broken guitar. Most of the brass instrument players know how to fix the problems of their instruments by themselves.
But for the woodwinds, and especially for a flute player, the story is something else.

Although a flute is a pre-tuned instrument (in contrast to other musical instruments), many issues can make a flutist go to a technician. In many circumstances, if the flutist avoids it, a small problem might lead to complete damage to the precious instrument.

In general, the flute is made out of two types of materials: metals and natural materials. The body of the flute is made of various alloys of different metals (in this article, we are talking about the transverse flutes made of metal, not the wooden flutes, although some of the tips are common in both). The core elements are silver, nickel, and copper. Sometimes gold or platinum are used in the flute structure. The more valuable flutes have more silver or gold and less of the other metals. Since silver and gold are soft and flexible metals, using more of them creates a better sound because it produces more vibration. If there is more nickel, copper, and other metals in the alloy, it makes it more arduous and more stable, but causes less vibration and diminishes the sound quality.

Some parts of flutes are made of other kinds of metals. For example, the screws, washers, and springs are made of steel. The springs sometimes are made of silver, gold, or platinum to help with the vibration.

The parts of the flute made of natural materials are pads, felts, and corks. During recent decades, flute makers sought to produce pads from synthetic materials, which have some advantages and disadvantages; however, we will not discuss it in this article.

Some key corks, especially the bumper corks, are made of types of plastic. Headjoint corks are also sometimes made of synthetic materials.

After the brief discussion about what materials are used for the transverse metal flute, we can talk about the problems they cause that make the flute one of the most vulnerable instruments to damages compared to other musical instruments.

The metal structure of the flute makes it susceptible to various mechanical issues. Since the flute is made of soft metals in order to vibrate better and has very small, thin, and delicate parts, bending any part of the flute can become problematic. Bending the tube prevents the blowing wind from moving directly in a straight line inside and doesn’t let the air pass evenly under the tone holes. Any dents on the surface of the tube make the wind change its direction, and this alteration of the wind affects the overall sound of the flute, depending on the size of the dent.

The three main parts of the flute (the headjoint, the body, and the footjoint) must fit the other part so that it remains stable, in other words, not too tight to need a force to go in or to be pulled out of the joint part.

A tight joint makes the flutist push in or pull out the part firmly, leading to various bends in the tube. A loose joint acts as a block for the vibration of the tube, so the pulse cannot be transferred to the lower parts. On the other hand, if the tube rotates easily in the regions with a loose joint, we may have air leaks from a loose joint.

On the tube of the flute, we also have tone holes. The edge of a tone hole is placed on a chimney that may be soldered to its opening. It can be made by drawing out of the hole during the flute-making process. The chimney’s edge should be leveled and flat so that a keypad could sit on it and completely seal it. Any damages to the tone hole cause some gap between the pad and the hole when the flutist closes the key, which causes an air leak in that key.

Although the flute makers try to make the keys, rods, and mechanism with a stronger alloys, the keys and rods of the flute are susceptible to all kinds of bends in any direction. One of the causes of bending is joining the three parts of the flute by taking the key part of the body or the footjoint by hand and assembling the flute. This happens mainly when beginner students who are not aware of the principles of flute maintenance want to assemble or disassemble the main parts of the flute. But it can also happen when there is a minor problem, such as a small air leak in a key. A flutist puts more pressure on that key while practicing, and over the years, the key gets bent. Sometimes these bends happen by placing the three sections of the flute the wrong way inside a flute case and closing it by force against the displaced parts.

Natural materials and issues with pads, moisture and leaks

Now let’s talk about the natural parts of the flute.

Traditionally, the flute pads are made of a woven felt and covered by bladder skin on the top and sides, with cardboard on the bottom. Anything that may affect these natural materials can affect a whole pad and the sound of the flute. Some examples are humidity, hot or cold weather, molds, fungi, and so on.

As a natural material, the flute pads can be expanded or shrunken under the abovementioned factors. These shrinkage or expansions make the surface of the pads unleveled, so the pad cannot sit well and seal the tone hole properly. As a result, we’ll have air leaks from the key. Leaking of the air in the upper keys weakens the force of the blow. The air leaks from a key affect the key itself and affect the sound of the lower keys. The air leak of a lower-key can affect the sound of the upper key too, when the flutist wants to play high tones.

The other parts made of natural materials in the flute are corks and felts of the keys and the cork of the headjoint. The corks under the key tails, bumper corks under the trill keys, and C# key act as a leveler and a stopper. They determine the distance between the keys and the tone holes when the keys are open. These corks also prevent the metal of the key tail from hitting the surface of the flute, which means they avoid the damages of the flute surface and avoid making a click sound. The felt or cork between the right hand and the left-hand mechanism connection adjusts the movement of these two separate mechanisms against each other. The key corks can also be shrunken due to humidity and the weather or get thinner due to usage.

The headjoint cork is placed behind the headjoint stopper’s reflective plate and acts as a sealing for the blowing wind. It prevents the air from moving back and escape from the top of the headjoint. The headjoint cork can be affected by temperature and humidity. If it gets shrunk, it cannot stop the air from leaking, and if it expands, it makes the stopper get stuck in the tube and doesn’t let the flutist adjust the distance of the lip plate from the mouthpiece. A headjoint cork is also the best place for the growth of various bacteria and fungi, predominantly anaerobic bacteria. This can lead to multiple airway infections in a susceptible flutist if the cork is not cleaned or even replaced annually by a technician.

Wears and tears on the skin of a pad are also a problem. When the skin of a pad is gone, the edge of the tone hole touches the bare natural matrix of the pad. Imagine if we have to close a hole with a finger without the skin! Pads can absorb dirt and become sticky when the flutist does not regularly clean the flute and inside of the flute case. There are flute players who leave the cleaning rod with the cleaning cloth or brush is still being attached. This is the worst situation you can provide for your flute pads to become sticky, as the humid piece of cotton or brush always remains inside the tube and damages the pads. This creates a good place for germs such as molds and bacteria to grow in a way that you can see their colonization as dark green or black spots on the pads.

Let’s talk about the tarnish. Tarnish is the oxidation of the surface plating of the flute. A flute should be plated. The plating of the flute surface gives it a shiny look and prevents the wall of the tube from oxidation and destruction. However, plating is always susceptible to oxidation because it is exposed to finger humidity. The skin secretions such as sweating contain acids and other molecules that, if not cleaned daily by the flutist, can promote the plating alloy to be oxidized. This oxidation, like rust on iron, destroys the plating, makes it go away, and the wall of the tube becomes exposed to the air, which will damage the flute. The tarnish color depends on the alloy of the plating. Sometimes there is a black, brown, or even blue tint. In any case, as soon as a flutist finds a color change on the flute, they must show the flute to a technician for a complete check-up of the plating and to remove any tarnish. Never try to remove tarnish yourself utilizing the solutions or tarnish removal sold at a market, as the solution for removing tarnish from the flute surface is unique. Only a technician knows how and to what extent the plating’s tarnish should be “rubbed” to avoid plating removal.

The technical aspects of all kinds of problems in the flute are too much to be even briefly explained in this article, so we hope we would present them little by little and give the readers the tips and clues about flute problems in the upcoming articles in the future

A professional flute repair technician in Montreal, Canada since 2015, with an extensive prior experience in a woodwind repair service in Tehran, Iran. A member of NAPBlRT, The National Association of Professional Band Instrument Repair Technicians, Inc.
Amin has clients from all over Canada, United States, Europe, and the Middle East who ship their flutes to him for repair.

3 thoughts on “Flute, one of the finest and most sensitive musical instruments”