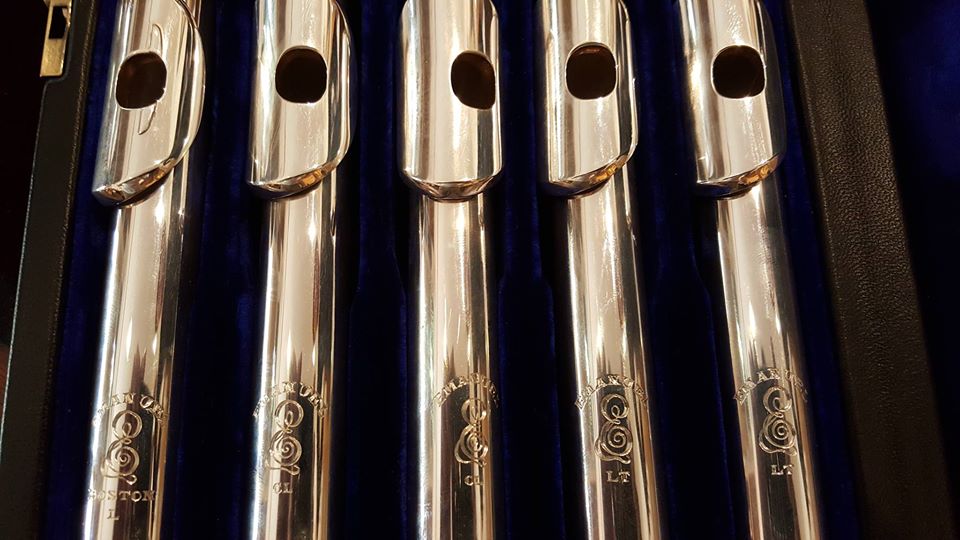 Making a headjoint draws on rigorous training in the mechanics of sound and surgical skills in measuring and cutting. But to produce a quality head, a flute maker also needs the ability to dream, hear, and intuit.

When it comes to headjoints, the more you know, the more you realize you don’t know. We all favor a flute-and-head combination that has a good, open high register, minimal air turbulence, a full low register, an even transition through the middle, and enough resistance to allow musical expressiveness. What more? One that rings with a tone we adore. Some of us, urged on by a sound we can only imagine, are willing to spend years of our lives in search of it.

There is plenty of material on headjoint acoustics, design, and shopping. Two articles, Roland Stycos’s “Shopping for a New Headjoint,” and Patricia George’s “All About Headjoints” provide solid, practical information. One finds plenty of recent scientific explorations, both controlled and uncontrolled, to inspire or confuse, starting with Arthur Benade’s 1965 article, “Analysis of the Flute Head Joint.” Eldred Spell’s article “Anatomy of a Headjoint” is available online. With readable diagrams, it gives a concise summary of design elements: headjoint tapers, risers, striking wall, corks, crowns, and more. (See sidebar for more information about these articles.)

In the introduction to his article, Spell wrote: “During the past few years a number of design changes have caught on, most of them emanating from London.…Some of the mystery surrounding the design and manufacture of headjoints has been removed, at least among those actively involved.”

Almost certainly, the Londoners he referred to were Albert Cooper, William Bennett, Elmer Cole, and Trevor Wye. In the 1960s and 1970s, these flutists, designers, and makers worked collaboratively on scales and headjoint design. Most headjoints now sold are built using parameters—for hole dimensions, wall height, angles, and norms for overcutting and undercutting—derived from the work of these men.

Nevertheless, a mystique still surrounds state-of-the-art, hand-cut headjoints. As with sport cars and wine, names for headjoints run to the racy, esoteric, or eclectic. It seems you need a masterclass in market choices, or at least an online tutorial, simply to test out a few heads.

In her 18 years of work with a flute-making company, Elizabeth Watson has cut by hand the embouchures for thousands of headjoints, and consulted with countless customers. In her dreams she hears the sound of her heads playing around the world—all at once. When helping players select a headjoint, she first listens to how they describe sound, then “translates” this to her own experience.

A headjoint might sound “reedy,” “bright,” or “growly”; one flute maker compiled a list of 300 adjectives describing the sound of the flute. Depending on how sound projects into the room, “buzzy” might indicate “noisy,” or it might mean “rich.”

What these makers emphasize is context. How a headjoint feels to play, and how it sounds, are not the same. What instrument had the flutist been playing the moment before? Who is listening? From behind or in front of the flute? At what distance, in what kind of space?

Flute maker David Williams speaks of having a “handle on the last real magic that exists in the world. People think computers are magic….The real magic is music and musical instruments. We make the wands, you know.”

The musical character of a silver headjoint is formed with each consecutive choice made—of material, tools, methods, and more. The tubing, ordered to meet specifications for wall thickness, temper or hardness, and alloy, is first cut to proper length. Then it must be “drawn” down over a mandrel, a steel rod filed to a precise taper that bears the internal dimensions of the headjoint. That takes human muscle and the help of an arbor press, a venerable tool used in many industries.

Next, to make the lip plate, a flute maker starts with a sheet of silver perhaps .032” thick. He might trace the shape, cut it out with metal scissors, file it even, then hammer it, one blow at a time, around a mandrel shaped as the lip plate. Or, with heavy, custom-made tools called dies and a foot- or electric powered “punch press,” he might stamp out an oval shape with one bang, and with a second punch of the machine form the plate’s curves and beveled edges. An undersized embouchure hole is punched here, too, which is then enlarged and refined using round files.

Next, the flute maker matches up the opening on the underside of the lip plate to the top of the connecting riser, or chimney, usually a casting. A torch solders them together, and then solders this lip plate assembly to the tube. Drilling through the riser, the flute maker punctures the head tube at the bottom.

Using files, at this point the flute maker might want to create a curve for the chin, or lower the overall height of the wall. He files and sands smooth the lip plate. Polishing and engraving can come later.

The head now assembled, an eager flute maker could tootle on its sharp and shiny edge. But, even with all the basic shapes in place, he wouldn’t produce anything you’d call lovely. Coming at the end of a process already replete with options, the final sculpting—hand-carving the inside of the embouchure hole to the proper dimensions; undercutting the bottom of the riser’s wall; and overcutting the top—offers flute makers a significant opportunity to construct the sound of their dreams.

Flute makers protect, covet, and sometimes share risers with colleagues; risers have a major effect on the sound of the headjoint, and their shapes can vary widely. Some end up in embouchure holes that look almost rectangular, or more oval. The riser might flare into a trapezoid at the bottom where it joins the tube, or it might be symmetrical. The blowing wall might be straightish, or bow like a plumped pillow. But when building a modern concert flute, there are limits to what you can do.

So here is a truth and a paradox: Most makers of professional, hand-cut headjoints adhere strictly to common measurements; at the same time, they explore an infinite number of variables. Recognizing this paradox, and accepting that every cut affects the outcome, is what makes this work so satisfying.

The goal is for a height of 4.9 or 5.0 millimeters on the front, striking wall; the difference between these numbers is four thousandths of an inch, or the thickness of a stiff piece of paper. The angle of the wall should incline toward the tube at seven degrees; the distance from front to back is 11.8 or 11.9 millimeters—diagonally across, a similarly tight range.

Of course, rounded edges become harder to measure; as they work, makers insert into the hole gauges clearly marked with measurements, checking their progress toward compliance.

Stray too far from the parameters, says flute maker Chris Abell, and “you’ll have a hole that doesn’t sing bass or doesn’t sing treble.” He adds, “but within those parameters is a world where you touch this or touch that, and interesting things happen.”

Picking up a coffee cup, Watson says, “You tell two people to draw this cup. They’re going to sketch the same cup, with the same tools, in the same light. But the result will look different.”

Headjoint makers first train to be consistent. Next, with skill and control, they learn to work within a domain a few thousandths of an inch wide, to craft the difference—between the sound of any head, and the sound of theirs.

Abell started his business because “I had a sound in my head that was wood.” Williams strives for the timbre and response he loves, and admits it’s an evolving practice. Watson believes that every headjoint is a compromise of some sort. Heads that are easier to play, that do everything they’re supposed to do, may not sound very interesting or rich. Emanuel prefers those headjoints that require some getting used to, revealing their merits and charms only after you work with them for a time.

Using a cutting tool with comfortable handle and a sharp, three-sided blade, headjoint makers work to spec, but it’s an intuitive, empirical process. For example, Watson says, she might be inclined to cut more aggressively on one angle, or back off on another. So to be consistent, she tries to reverse that; she’ll dig in where she naturally might back off, and back off where she wants to be more aggressive. If it turns out to be a marvelous headjoint, she’ll file this experience away with others like it.

“This,” she says, “is how headjoints are really made.”

As I watch, Emanuel “opens up” a head with a stuffy sound, scraping the walls, trying to maintain desired angles, increasing both the front-to-back and diagonal dimensions, removing barely a tenth of a millimeter. But now, though much better, the sound is a bit “hissy” and notes are cracking. With a few deft motions, he smooths out the striking edge. Clean and clear, its voice bears no resemblance to what I heard just minutes earlier. High or low, more or less, curving or straight, sharp or rounded—peering into that hole, the possibilities seem endless, and cutting embouchures takes courage. The prize each maker seeks is a truly distinctive sound.

When Abell paid a visit to Albert Cooper in England, he was accompanied by English flutist Kate Lucas. She tried out a new headjoint made by Cooper, and exclaimed, “Albert, what did you do? This is an amazing headjoint!”

Albert Cooper’s response was “What do you mean, what did I do? It’s just a hole.”

*The article first appeared in The Flutist Quarterly in the Fall of 2007.

Taking what she thought would be a temporary respite from academia after college, Sarah Merrow became an apprentice at Prescott Workshop, makers of Renaissance-and Baroque-period flute and recorder reproductions. In the 1990’s, in partnership with flute-maker Emanuel, she helped to create Emanuel Flutes, an atelier that builds exquisite concert flutes, one at a time, for professionals and soloists around the world.

Her flute repair business, Syrinx Flute, was established in 2006, allowing Sarah to work on the fine instruments of professional performers, collectors, and conservatories, including some of the antique flutes at the US Library of Congress. Now in semi-retirement, she continues to work on Emanuel Flutes part-time, and has returned to her first love of writing; Sarah’s poems have been published in dozens of literary journals and in two volumes of poetry.