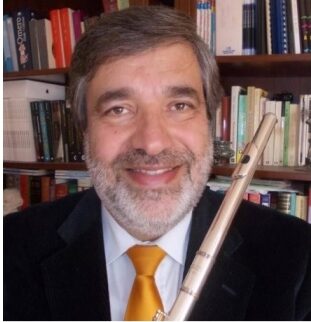 We can achieve it by following a suitable itinerary and by taking these three levels of performance into consideration:

The first level is represented by playing. To get there, we need those skills that make a musician a “Virtuoso”: capable of expressing the highest degree of all possibilities of their instrument.

While listening to a virtuoso in concert one should experience a sense of wonder and perhaps even a sense of, as they say, “speechlessness”. Virtuosos are at the top level of technical skill, physicality and instrumental mechanics. Not everyone can achieve these goals and for art it is still not enough. The virtuoso wonders the ear, but does not enchant the soul. And this is the language, not communication.

We get to the second level, “interpretation” through formal analysis, critical intelligence and aesthetics reflection. Not “playing” anymore but interpreting.

Etymologically, the word means “mediation”, in the sense of “connection between a source and a recipient.”  An interpreter’s task is therefore reveal the meaning, not always explicit, of a text. It is definitely a higher level of knowledge, because it contains within itself the quality of the first level.

And here, now, is a clarification:  Often a distinction is made between “performers” and “technicians”. A distinction that is all out of place. If it was true that it is enough to be an interpreter while possessing a technique, it would be equally true that having extremely fine technique means that it can guarantee achieving quite different interpretive goals. The “technique” does not consist in carrying bursts of dizzying speed notes; this, if anything, is “mechanical”, i.e. a technical aspect. Under “technical” we mean the actual physical relationship with the instrument: Knowledge and use of the entire physiological structure, the ability to obtain remarkable variety of tone and dynamics, high precision articulation … In other words, everything that contributes to ensuring that the instrument will become an integral part of ourselves, perfectly harmonized with our body.

An excellent technique is a prerequisite for the interpretation. Necessary, but not sufficient, because, as we have already said, more is needed. It feels so painful to see that pieces of the repertoire, required in the programs of competitions, are indicated as most virtuosic, as though Mozart’s Adagio was easier than Prokofiev’s Scherzo or that less technique is needed to perform the Adagio than to play the Scherzo.

This is a matter of point of view…

A few words about interpretation: The music, in order to exist, needs “mediation.” The artist fixes forever his thoughts on canvas, the sculptor creates an artifact and from these creations’ a message is directly sent to the “user”. In music, this direct exchange does not occur. Music is not the musical text, Music is its transformation into the notes. So, those who must transform the graphic sign into sound do matter. It is a Symbolic language, and a language that “manifests and lives over time”. Intermediaries (agents) between the sign and sound are the player and their instrument. With technique, a performer knows and uses the instrument; with interpretation, he decodes artistic thought of the composer that is enclosed in the sign. For this, we need other faculties, which is mainly reflected in the analysis and further distinguished through formal analysis, harmony, aesthetics and stylistics.

The individuality of each performer makes the various interpretations so different to the point that no one can ever say “this interpretation is better than that one.” There are no “levels” of interpretation; there are only “varieties” of interpretation. But then, if all interpretations are legitimate, which ones between them are right? Which ones, I mean, do correspond to the composer’s thought? The solution to those concerned does not exist because … there is no problem. The musical text is what it is, ink stains on staff sheets, the composer (most of the time) is long dead, the performers live their lives in their own time. How is it possible, therefore, that we can express genuine thoughts of a composer starting from similar premises? Will it be sufficient to break up the text, engraved in semi-phrases, phrases, periods and then reassemble it? To do harmonic analysis? And perhaps some do not know how to tell the difference between the “Soviet” spirit embodied in some pieces by Prokofiev from the “Russian” spirit by Rachmaninov?

Here, as you can see, it must be something else.

We come finally to the third level, which is revelation. It is something more than interpretation, because it involves other existing faculties, to varying degrees, in all of us. You only need to become aware of and learn to use them. Those are the faculties of “fantastic rationality”, imagination and revealing ability.

As in the various religious traditions there are the interpreters of sacred texts and the prophets of truth, in our case we find interpreters and artists / re-creators who are excellent interpreters, such as Toscanini, Callas, Rubinstein, Michelangelo, Rostropovich. Not only have they expressed extraordinary technical skills (first level), not only careful, smart, stylistically valid interpretations (second level), but also something more: a persuasive power not only on a rational level, but also on an emotional level. To listen to them you feel a thrill, the thrill of a real intuition. The world does not end at the rational. Is love rational? So why not believe that we can get to play with the soul? It’s a form of intuition and of a very high knowledge, the synthesis between animalism and spirituality, between memory and meaning of life.

The three levels of paths will be “circular”. There will always be a return to the first level, passage to the second and then on to the third one and from this again to the first. And so on, always, in a cyclic manner. Even now, when we are able to “reveal” the musical text, we will always find more space to the interpretive refection, which, in turn, will pose problems and propose technical solutions, to the performance. This is artistic life, and this is “playing with the soul.”

We said at the beginning that between one level and the other there are routes of development.
There are practical exercises, to cover them successfully. We must work with self-confidence and willingness to evolve. The path will not be quick, nor easy. However, it will be exciting because it will allow us to express what we once believed was the privilege of only a few: the power of their own talent, the voice of the soul.