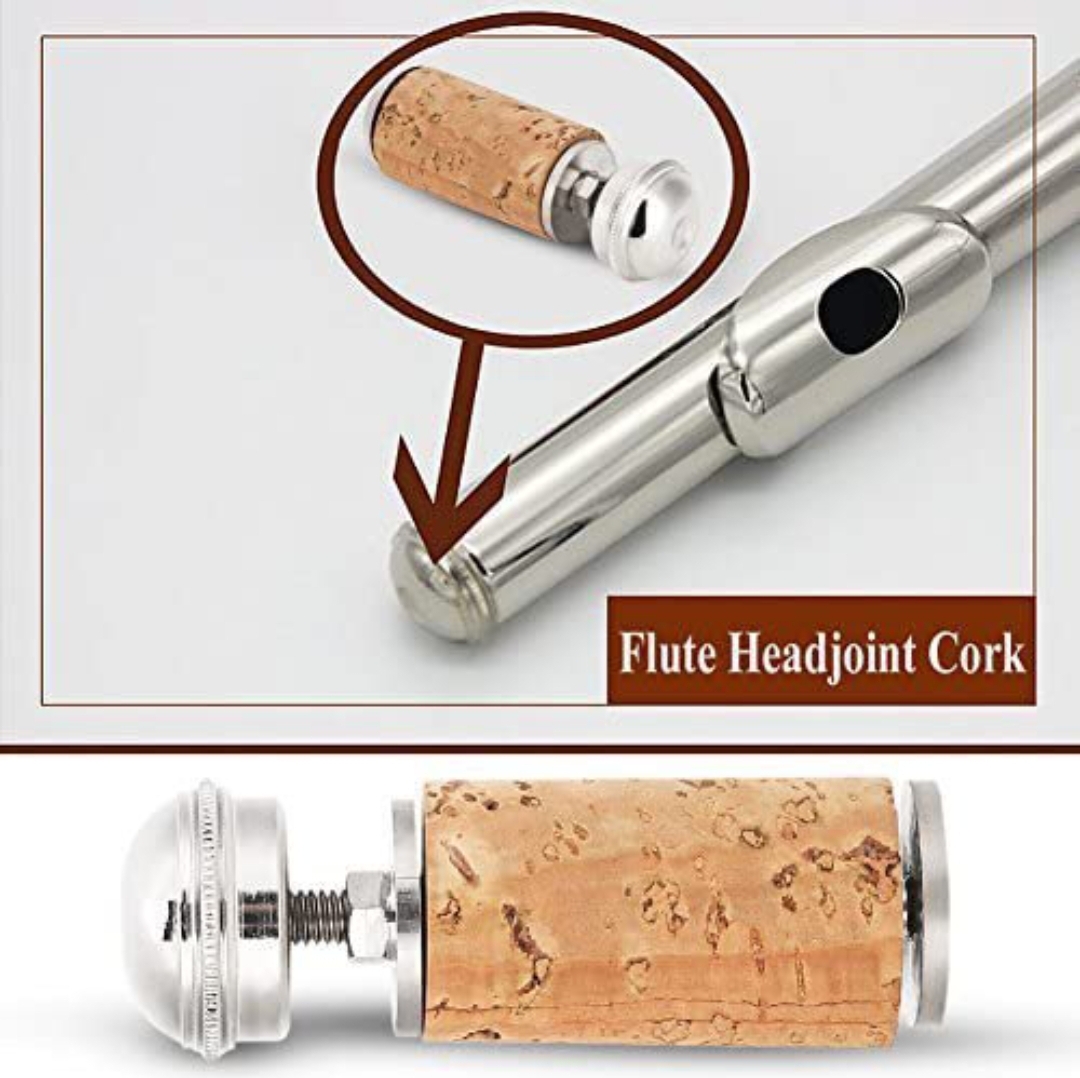 The cork stopper developed by Boehm during his intensive research between 1832 and 1847 is still used by most flute makers today. Indeed, it has evolved a lot. It consists of a small piece of cylindrical shape, occupying about 5.2 cm of space between the closed top end of the flute and the bezel through which the flutist blows. This part consists of a cork cylinder, perforated in the center to allow the passage of a screw welded to a small metal disc that serves as the base of the stopper. A piece of cork fills the tube in order to touch its inner walls and hold the stopper plate/disk and screw. A piece of metal (which may be made of gold, silver, platinum, nickel, or copper) is placed at the top, called the crown because of its round shape, which fits over the screw and covers the instrument at its upper end. Thus, the system is simple, efficient and does not damage the flute head tube.

However, the excessive space occupied by the soundproofing material that stopper is made of, contributes to a significant reduction in the resonant ability of the instrument. The cork fills about 3 cm of the stopper’s total space of about 5.2 cm (i.e. more than half of the space), since the more contact it has with the walls of the flute tube, the safer this mechanism will not move. Factors such as sudden changes in air pressure or temperature can cause the stopper to move, affecting the entire tuning of the instrument.

Together with some flute colleagues, we’ve been trying to challenge the use of non-soundproofing materials (instead of cork), as well as reducing the size of the stopper cylinder, which are the solution to get a wider and more resonant sound on the flute. We are starting to use copper because it provides the same weight stability in the balance of the instrument, with less material present in the cylinder. We also used it to improve sound quality, of course. This method is already frequently used by many stopper manufacturers around the world. What we tried was to keep as much free space as possible for resonance, but with both ends of the piece a little heavier, not just because of the weight balance but also because of articulation issues.

Our main goal was not only to find a more resonant tone, but also to keep it focused and have clear articulation. Of course, this also depends a lot on the flute headjoint and the lip plate model/cut. But while testing on some non-cork stoppers, we realized that “upgrading” the resonance can sometimes lead to an out-of-focus sound, which requires extra effort from the player – not only in order to further focus it, but also to keep it during articulation. With that in mind, we also tried to put a stronger material on the edges of our metal piece (depending on the stopper) so that we can have weight and better balance.

Also, on the copper models, we decided to make a small detail on the inside to make sure it was attached to the 24k gold screw. For gold, we have left the same material for now. Another small change that was made was to replace the commonly used rubber bands with a hard plastic band with a tiny rubber part that touches the tube. With this modification we are adding a little more weight and we are making these little stripes (one on top and one on the bottom) last longer time. Simple elastic bands break easily and do not hold the stopper perfectly. With less rubber material attached to the hard plastic ones, we believe they last longer and hold the stopper better.

The pictures above and below show the beginning of this process. You can see the development of two versions of this stopper. On the bottom part, for the first option, we started drawing the holding part for the stopper. It consisted of two layers of metal (depending on the cork) filled with hard plastic and rubber at the end in contact with the tube. We quickly realized that there was too much material, so we made it thinner. We also replaced some of the hard plastic layer with metal to balance the weight of a lighter cork with less material. This step wasn’t enough to keep that balance, so we added the necessary weight to the top, to a small piece that goes into the stopper to make sure it stays on the screw.

Take a look at version two as well. Here we decided to have points of contact with the tube wall. One up and one down. To do this, we built a thinner cylinder, expecting the amount of material on the new top disc to be balanced. After unsuccessful attempts, we found a solution; keeping the same design, but the top disc will be completely filled with metal instead of lightweight plastic. Thus, the weight will be replaced by the top, which will allow us to have less cylinder around and get more resonance from the empty space. This version showed good results in tonal resonance, but some problems in the field of articulation. Adding more material to the discs was the solution to get the best result in this matter.

As you can see, all dimensions and the correct scale are not displayed in these first drawings. The reason is to avoid copying or using it for commercial purposes. I remind you that this study, results and stoppers are not for sale and we are not going to do this. These are just the first steps of our research to find new ideas and enjoy and share our enthusiasm for the flute.

For these acoustic tests, we used a 14k gold Muramatsu RBEO flute in a room of approximately 22 m2. Cork and copper stoppers were tested. By playing four musical notes in different registers of the instrument, it was possible to recognize the evolution of its sound amplitude and resonance. The presented research will continue in the next stages of testing, where various 925 silver flutes will also be used.

All these tests, possibilities and materials used are still being studied, modified and mixed in order to try all possible ways to develop this system. We also study and create various shapes that are not traditional cylinders to test and understand what effect they have not only on tone and intonation, but also in the chapter on articulation.

Francisco Barbosa, described by Jacques Zoon as “one of the most interesting artists of his generation”, is the soloist of the BD Chamber Orchestra. From 2008 to 2010 he studied in Vienna with Wolfgang Schulz. He received a bachelor’s degree. in flute (orchestral performance) at the Academia Superior de Orquestra da Metropolitana in the class of Nuno Inacio in 2013. He later studied at the Reina Sofia School of Music until 2017 with Jacques Zoon and Salvador Martínez Tosa. He studied chamber music at the same institute as Gustavo Nunez, Radovan Vlatkovic, Klaus Thunemann and Hansjorg Schellenberger.

Francisco Barbosa has been a guest musician at various flute conventions and festivals in Europe and the USA. He gave recitals and master classes in Portugal, Spain, Belgium, Slovakia, Israel, Panama, as well as in the USA in New York, West Virginia, Los Angeles and Las Vegas. He is a guest flutist with the Orchestra XXI in Portugal. In 2019 Barbosa released his first CD “Mozart Flute Quartets” for the Spanish label Virtuosi Records and in 2022 Barbosa released his second CD – “Telemann, 12 fantasies for solo flute”. In addition to his orchestral career, he is the author of a series of flute books “A New Approach to the Art of Flute Playing”, releasing 4 volumes from 2018 to 2021.

Francisco Barbosa’s debut at Carnegie Hall, New York is scheduled for May 17, 2022.

3 thoughts on “Flute stopper research: where does it lead us?”

We noticed you're visiting from France. We've updated our prices to Euro for your shopping convenience. Use United States (US) dollar instead. Dismiss