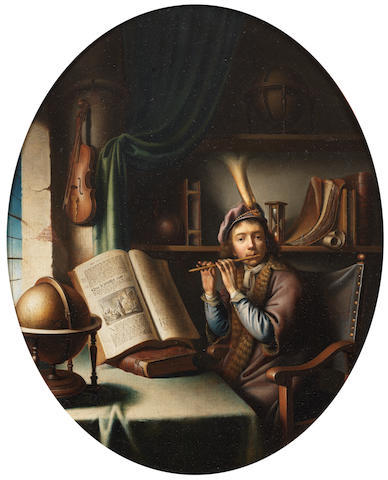 The Dutch Golden Age was a period in the history of the Netherlands, spanning about the 17th century, when the Dutch republic rose as a world power, experienced a period of unprecedented growth and Dutch trade, science, military, and art were among the most famous in the world.

The Peace of Westphalia in 1648, which ended the eighty-year war (1568-1648) between the Dutch Republic and Spain and also the thirty-year war between other European superpowers, brought the Dutch republic official recognition and independence from the Spanish Crown.

Religious freedom within the Netherlands has attracted many people. They were persecuted in other countries because of their beliefs and fled to the young republic, which readily accepted them, which ensured freedom of movement and sufficient work.

The country has become an important center of knowledge, as a result of developement of the humanities and natural sciences, founding the Leiden University and publishing works of many writers and scholars, who were allowed to teach freely.

Painting and music were two very important arts that have an undeniable relashionship.

Research shows that 12 percent of the paintings created in the Netherlands in the Golden Age are devoted to the theme of music. Flute was one amongst the foremost popular instruments in such paintings.

THE ROLE OF MUSIC IN LIFE

Music in the Netherlands in the 17th century was an essential part of life. Dutchmen played music everywhere – at festivals and official events, in taverns and royal palaces, in churches, in the dance halls of the town halls and in the houses. With a modest list of entertainment options available in those years, music remained one of the main ways to brighten up leisure.

Home concerts were especially common: most of the wealthy people played one or more instruments and enjoyed playing music and singing with family and friends. Music, singing and dance lessons were common practice in teaching middle-class children and young people.

In many cities there were Collegium Musicum – amateur ensembles of wealthy burghers who practiced “serious music” – Italian madrigals or Latin motets. Collegium Musicum gathered in the house of one of the members of the ensemble or in a specially designated city room (the forerunner of future concerts of the 18th century) and studied under the guidance of a professional musician.

Wealthy Dutchmen would acquire the best music instruments made in Italy or France. They also ordered instruments to be made and decorated according to their personal taste.

Musical talents and the possession of expensive instruments gave their owners a prestigious status and enhanced their role in social life. However, noble townspeople did not want to be confused with professional musicians, who occupied a lower level in the social hierarchy. To emphasize the difference between them and rich amateurs, who play music not for the sake of earning money, but for their own pleasure, professional musicians had to wear bright and pretentious clothes.

Girls and women in the Netherlands of the 17th century also were skilled in music, which was appreciated as one of the intellectual qualities of women and was encouraged in every possible way. However, playing musical instruments and singing were also great excuses for flirting. In those distant years, unmarried girls and single men were allowed to be alone in extremely rare cases, and playing music was just one of such rare opportunities.

Rembrandt is the great master of chiaroscuro and the greatest artist of the Dutch Golden Age. He was able to embody in his works the whole range of human experiences with such emotional intensity, which the fine arts did not know before him. Rembrandt’s works, extremely diverse in genre, open to the viewer the timeless spiritual world of human experiences and feelings. In the prime of his creative maturity Rembrandt broke with the canons of Dutch portraiture, predicting in two centuries the artistic finds of the 19th century, the era of realism and impressionism.

Rembrandt also left us with many sketches from his daily life, sketches of women with children and beggars. People “from life” are depicted as a specific part of society performing earthly affairs. Among them is a wonderful etching “Flutist”.

During his lifetime, Jan Vermeer became famous as an artist and art critic in his native Delft and The Hague, but he died in debt. His wife had to give up her inheritance in order to pay off creditors, and soon the artist was forgotten. But the years passed, and Vermeer became one of the most famous masters of Dutch painting, among Rembrandt and Van Gogh. Vermeer canvases reflect his bright feelings and perception of the world in all colors. He never skimped on light and air in his canvases. Multicolor was the master’s trademark and spoke of his courage in experimenting with the feelings of the viewer and his own school.

Jan Steen is the most cheerful Dutch artist in the 17th century. His themes are genre painting. He has no ceremonial scenes, his heroes are real people with their merits and demerits. His paintings, permeated with a rough, but good-natured folk humor, are distinguished by a sharp, sometimes satirical characterization of the characters, lively observation, an entertaining narrative, skill in conveying figures, details of furnishings and clothes

The painting “The flute lesson” depicts a fairly popular 17th century subject – a private music lesson or a concert, spiced by a touch of seduction. There is a drink on the table, and on the right is probably a bed. Steen has a great sense of humor and can be self-deprecating, satirical, lustful, or a mix of all. He often portrayed himself and his family in his paintings, depicting comedic and moral scenes.

This work is especially intriguing and is remembered for the expression on the man’s face, in which we recognize Steen himself and his wife Margaretha (Grietje). Thus, any moral in this story gently deviates from overly preaching or complacent.

Ter Brugghen was the most important of the Utrecht Caravaggisti—the Dutch followers of Carravaggio. Caravaggio’s appeal to the genre of everyday life and the approximation of a religious picture to earthly reality made the artist the founder of the realistic trend in the art of the 17th century. The work of the genius Italian found a wide response: in his works, the artists discovered ways to create realistic art, which by that time had become an urgent need in all art schools in Europe. Terbrugghen met with Rubens and Caravaggio during his life time. He died during a plague epidemic at the age of only 40. Today ter Brugghen works are presented in the largest museums in Europe and the United States.

The artist loved to paint the figures of musicians, traditional for the followers of Caravaggio, to include them in genre compositions. Ter Brugghen also turned to religious and mythological subjects. His art is cheerful in feeling, although the images created by the master are sometimes fanned with light sadness.

From the artist’s canvases one can hear the sounds of a merry song or the melody of a lyric duet.

Ter Brugghen achieved particular beauty of expression in the painting “The Flute Player” (1621, State Art Collections, Kassel). The flute melody, which the young man brings out with serious concentration, seems to materialize in streams of daylight, combining light yellow, blue and olive tones in a harmonious chord. The silvery color and contemplative mood of this work foreshadow the poetic art of Vermeer.

David Teniers was the most famous 17th-century painter of peasant life. He enjoyed international popularity in his own lifetime and during the 18th century, especially in France. The artist’s creative heritage includes about 2000 paintings. He worked in different genres, created canvases on historical, religious, mythological and other subjects.

Teniers’ painting “The Flutist” is represented by an enthusiastically playing flutist who personifies the ear from the allegory “Five Senses”.

NO GOLDEN AGE FOR MUSIC COMPOSITION?

The sudden and powerful thriving of maritime commerce originated a large, wealthy merchant class which lucratively sponsored the visual arts, literature and science. The 1600’s marked a golden age of painting in the Netherlands, however Dutch music failed to blossom into a true Golden Age.

There were a few reasons and circumstances to explain it. The dominant Calvinist religion frowned all music and organ playing during church services except for unaccompanied communal singing. Also, after the abdication of Charles V, who had always supported Dutch musicians, the cultivation of music at the Habsburg court ceased to be important. Thus, there was no incentive for major artistic innovations without ecclesiastical and aristocratic patronage.

Jacob van Eyck was one of the most prominent figures in music of the Golden Age – a Dutch nobleman, composer and musician, who was also blind from birth. He is widely known as a performer of the carillon and recorder, as well as an expert in the casting and tuning of bells. He often played in the church park for the amusement of parishioners. His compositions for the recorder were included in the two volume collection Der Fluyten Lust-hof, with about 150 pieces in total. During the composer’s lifetime, the first volume was published in 1644, 1649 and 1656, the second in 1646 and 1654. The works in the collection are varied and include folk songs, dance tunes, church pieces, psalms, and other popular music from the 17th century. Even today they are quite difficult to perform.

In the 17th century, instrument makers began making important changes in flute construction, improving tuning, portability, and sound. Flute makers in Italy and the Netherlands began increasing the diameter of the flute’s long tube, which mellowed the sound. The Hotteterre family of woodwind players and makers from Paris divided the flute into three sections in order to make storage and traveling easier and safer. Also, the instrument makers made tone holes smaller to allow more cross fingerings and increase the number of playable pitches.

Dutch artists were attracted by the diversity of the individual appearance of people and the richness of nature. They do not seek to create a generalized image, but convey what is characteristic and special. Artists do not use perspective or other theories, but through careful observation they convey an impression of depth and space, optical effects and the complexity of relationships between light and shadow.

Nowadays, visitors to the museum are rather indifferently looking at gallant knights and prim ladies, performing musicians, servants in the kitchens and lavishly served banquets. However, why did the Dutch of the 17th century esteemed these paintings so highly?

Was it only the artistic skill of the artists depicting ordinary life that made the mighty of this world pay a lot of money? No. The art of the Dutch Golden Age was not an ordinary reflection of the world, but the looking glass with numerous details revealing unexpected stories and meanings

If you enjoyed this article, try to take the quiz below to test your knowlege on the topic: