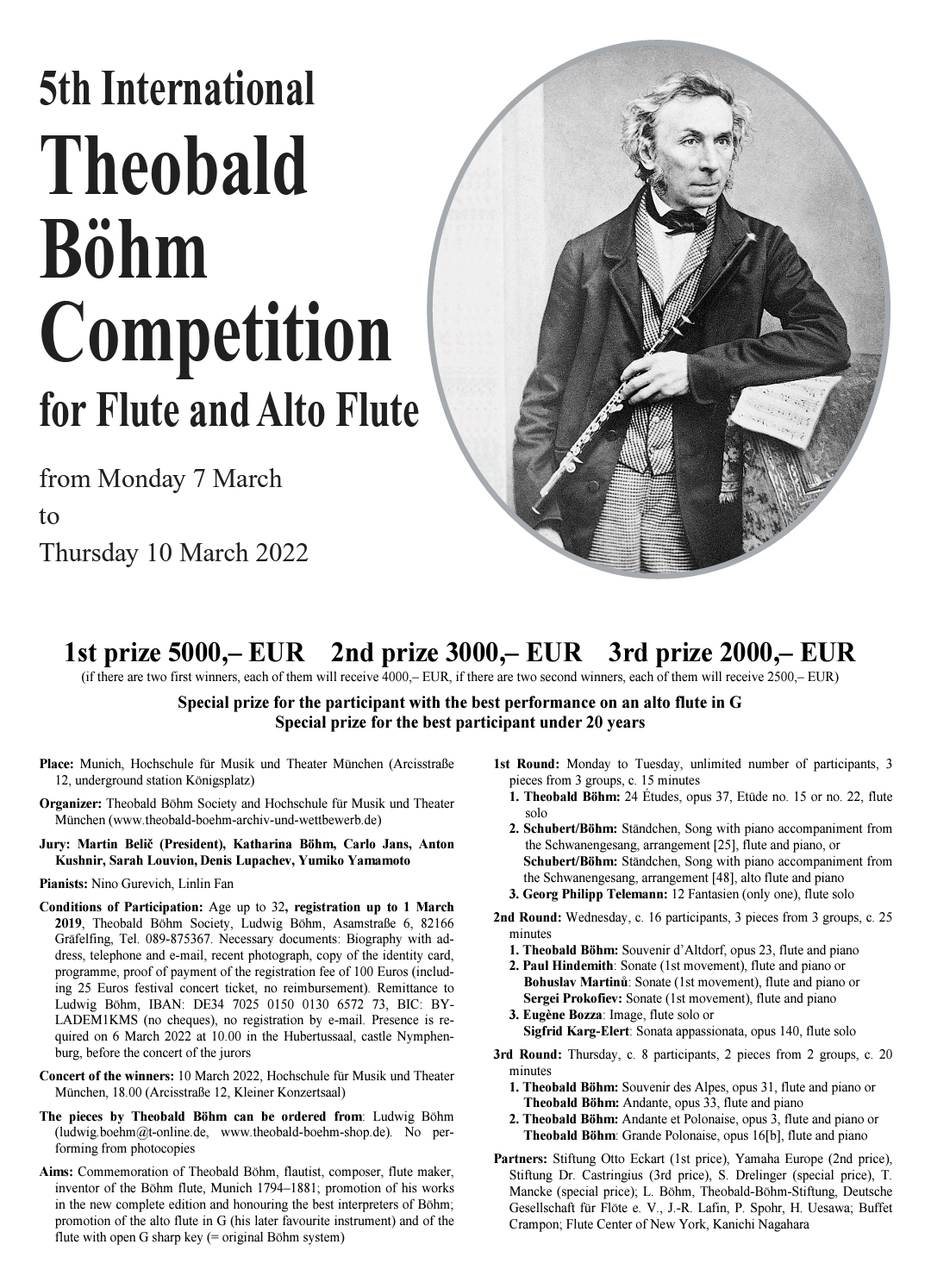 The 5th International Theobald Böhm Competition for Flute and Alto Flute will take place from Monday 7 March to Wednesday 10 March 2022 in the Kleiner Konzertsaal of the Hochschule für Musik und Theater München in the Arcisstraße 12. The entrance to the competition and to the winner’s concert on 10 March 2022 at 18.00 is free.

On the day before the competition, on Sunday 6 March, the jurors will play during the festival concert at 11.00 in the Hubertus Room of the Castle Nymphenburg arrangements of Theobald Böhm for flute with piano accompaniment. The tickets for the price of 25, 30, 35 und 40 EUR are available from München Ticket and from Ludwig Böhm (ludwig.boehm@t-online.de). None of the works was played in the former festival concerts in 1981, 1994, 2006, 20011, 2016 and 2019. After the festival concert, about 100 descendants of Theobald Böhm and the musicians will meet for lunch in the restaurant Hirschgarten.

The aim of the competition is, to keep the memory of Theobald Böhm alive, the world-famous Munich flautist, composer, flute maker and inventor of the Böhm flute. He lived from 1794 to 1881 at Altheimer Eck 15, where a commemorative plate reminds on him and he is buried in the Old Southern Cemetery in the Thalkirchner Street, section 12, where a wreath will placed on 6 March at 18.00.

The competition differs from the other flute competitions by the fact, that the romantic virtuoso compositions and arrangements of Theobald Böhm form the center of the program.

Ludwig Böhm was born in Munich, where he studied English, French and Spanish at the University and was a teacher from 1981 to 1983. Inspired by a great exhibition in the Munich Municipal Museum in 1981 on the occasion of the 100th anniversary of the death of his great-great-grandfather Theobald Böhm (flautist, composer, flute-maker, inventor of the Böhm flute, Munich 1794–1881), he dedicated his life from that time on to keeping the memory of Theobald alive. As a result of more than 30 years of research, he published in 2012 all 88 compositions and arrangements of Theobald together with Dr. Raymond Meylan and in 2013 20 books and 4 translations from and about him. He travelled to flute festivals in Japan, Australia, USA, Netherlands, Spain, Germany, Italy, Croatia, Luxembourg, Slovenia, China, Great Britain, Iceland, Thailand, Portugal, Chile, Poland and Armenia and presented a slide lecture about Theobald. He is the President of the Theobald Böhm Archive, founded in 1980, of the Theobald Böhm Society, founded in 1990 and of the Theobald Böhm Foundation, founded in 2014. In 2006, 2011 and 2016, he organized in Munich the 1st, 2nd and 3rd International Theobald Böhm Competition for Flute and Alto Flute.