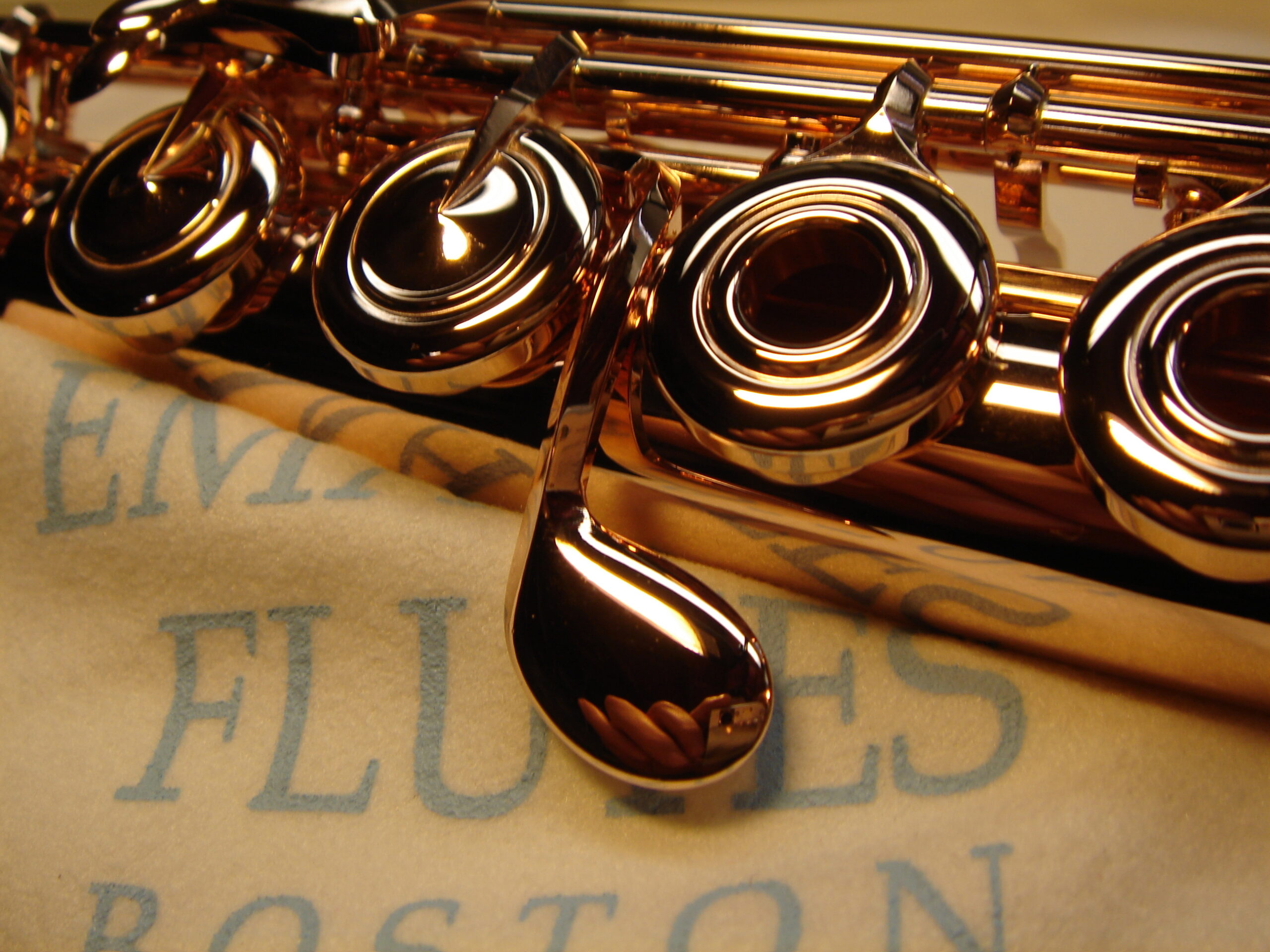 In 2021 a renowned brand Emanuel Flutes, based in the Boston area, USA marks 30 years of making flutes of an exceptional sound and artistic quality. At the end of August Sofia de Salis met with a Master flutemaker Emanuel Arista in Zurich, Switzerland to talk about his work and vision of the flute handmaking art.

Sofia: Dear Emanuel, congratulations on the 30th anniversary of the Emanuel Flutes! Your instruments are played by some of the finest musicians in the world and are appreciated for their incredible sound, beautiful design and a strong, reliable mechanism.

Please tell us how it all started?

Emanuel: At the beginning of my career I made flute cases with my father in Lima, Peru and exported them to our distributor in Cambrige, MA USA, which distributed them further to the other parts of the world. In March of 1976 I went to Cambrige, MA to manufacture cases in the US. At the time of my arrival there my brother initiated a new project – making professional piccolos.

We started a family business. Among my responsibilities was making/designing the tools to make the body, the heads and all parts to build professional flutes. I studied machine and tool operation at Wentworth Institute of Technology in Boston, which opened new dimensions in my skills.

The first piccolo was finished in 1976. In 1977 we started making custom professional flutes and had built our first instruments by 1978.

In 1978 we exhibited the first flute at the NFA Convention. It was purchased by a Peruvian flutist from Montreal, Canada.

The second one was ordered by Anthony Halstead from the English Chamber Orchestra while on tour in Boston, with William Bennet, playing the principal flute. This was the first time I met Wibb. The flute was built with William Bennett’s specifications. Anthony was a horn player, and he also played the flute.

Later we received orders and made flutes for the London Symphony Orchestra, the BBC Orchestra, Peter Lloyd and others. Before our debut as flute makers, the only custom made flutes for professional flutists were Powell Flutes and Haynes, and also Muramatsu, Japan.

Together with my brothers we made about 170 flutes until 1986. At that time I took a full time job in the telecommunication industry. Working in telecommunications honed my tool making skills. During this time I started designing my tools and parts from scratch, which lead to founding “Emanuel Flutes”.

The first component that I made using my own designed tools were the key cups for my flutes.

In 1991 I founded Emanuel Flutes together with my then-wife, Sarah Merrow. She took care of the office work, client communications and most importantly, padding the flutes, while I did the rest. Together we developed and improved the techniques and tools for finishing and padding the flutes with the traditional pads, achieving very long lasting results. We use the same time tested techniques up to this day.

The Emanuel Flutes were introduced in 1991 at the NFA Convention in Washington, DC. The flute #2 was purchased by James C.Scott, a student of Bennett and Moyse and #5 was purchased by Dr.Susan Berdhal

Two months later I exhibited my flutes at Flautissimo in Italy, where I met many wonderful European flute Artists, such as Maxence Larrieu, Giuseppe Nova, András Adorján, Alain Marion, and others, who recognized the excellence of my instruments and gave me a great and useful feedback. Maxence Larrieu purchased my flute #4.

Sofia: Your flutes are the work of only one master, which makes them very unique. Who helps you to pad and finish the flutes now?

Emanuel: My flutes are padded and finished by Sarah Merrow and Tom Peterson. Richard Degle is my engraver.

They all are masters and great people. The amount of time they take to finish the instrument is reflected in the stability of the pads.

The artistic and elegant engraving work that Richard does is just beautiful.

I’m so grateful to work with them and we all make the Emanuel flute.

Sofia: What flute scales do you use in your work?

Emanuel: Emanuel flutes are made on request with two excelent scales to choose from William Bennett and Albert Cooper.

Sofia: What is the difference between Bennet scales and Cooper scales?

Emanuel: The flutes before 1970s needed to be re-tuned in order to raise the pitch from A=435 or A=438 to A=440, so the flute companies shortened the head or the body in order to achieve it, but as a result the flutes became sharp in the left hand and flat in the right hand (or low register), and all three registers became out of tune between each other.

William Bennett, Elmer Cole, Albert Cooper and Trevor Wye wanted to correct the intonation problems to benefit everyone and worked on improving the existing scales.

William Bennett decided to flatten the high register and sharpen the low register. His goal was to improve the intonation of the flutes and that is why he gave his scales to a few flute makers to make the flutes. Then he played their instruments and made some adjustments. We made adjustments together for about 10 years.

Sofia: Did you meet Albert Cooper in person?

Emanuel: Yes, I did. He was a gentleman, kind and generous. Not only he did this important work on improving the scales, he also shared his knowlege and helped many people, who are still in the flute making business.

While traveling to London, I met Susan Milan and when years passed, she wanted me to make a gold flute for her with the same specifications of Albert Cooper flute #193 because he already stopped making flutes at that point. A while back, when I listened to Susan Milan, playing French music on her CD “La Flûte Enchantée” on the Albert Cooper flute, I noticed her beautiful high register and a free low register. I have never heard such a beautiful balance before.

When later I went to London, we visited Albert together with Susan. This time I specifically asked him for a permission to use his scale in the gold flute for Susan. I showed him one of the flutes that I made and he liked my work, saw my passion and talent and gave me his scale and a permission to use it. As a thank you, I put his barrel logo on the flutes that I make with his scale.

Sofia: Who else helped you along your way?

Emanuel: Many people helped me and shared their knowledge. I would like to mention my clients who made a great influence in the direction that I took, Emerson DeFord supplied some parts and gave helpful suggestions; Jack Moore gave me pictures and measurements of his 3 in 1 C# trill mechanism; Edward Almeida shared his knowledge of tools; William Bennett and Albert Cooper gave flute scales. I am very grateful and lucky to meet so many great and supportive people in the flute world.

Sofia: Your instruments can be compared to the Stradivari and Guarneri violins for violinists. What improvements have you made to the flute in recent years?

Emanuel: I wanted a more reliable, stronger mechanics and an expressive and warm sound. This is a part of my personality to always aim for perfection and artistic quality. The sound must blend with all instruments in the orchestra and have enough projection to be heard in all settings.

When I met Paul Verheij, soloist of the Royal Concertgebow Orchestra in 1993, he picked my flute up and played everything pianissimo. When he put it down, he said “This flute plays as beautiful as it looks.”

Let’s listen in the below video what is different about the Emanuel Flutes mechanism, explained by Emanuel Arista:

Sofia: What flutists play your flutes?

The relationships with my clients during these 30 years are not limited to only business. I work with each flutist individually and strive to realize their dream to produce the sound that they have in mind. Often they are not even aware of the possibilities the flute can have until they play my flutes. They greatly appreciate my instruments for allowing them to express the greatest changes in dynamics, going from ppp to fff. It is only possible on the instruments of the highest quality.

Sofia: Yes! The sound of your flutes is incredible! It is a combination of traditional flute sonority, inspired by the sound of Louis Lot and other famous French flute makers of the Nineteenth Century with the best most modern scales, functional key work and easy playability.

Emanuel: Nowadays instruments most are mass produced products, rather than finely crafted pieces of art. And I’m not interested to go that way because my clients appreciate how I make my flutes.

Sofia: What kind of music inspires you?

I like different kinds of music. I listened to a lot of jazz (Coltrane, Miles Davis, etc) and classical music. I really love Brahms, Mozart, Beethoven. I also love sacred music and old records. Now I listen to a lot of books on philosophy, history and literature, when I’m working. I always try and continue to expand my knowlege of any subject that seems interesting.

Sofia: Do you listen to flutists and flute music?

Emanuel: I really enjoy visiting my clients and have the opportunity to listen to concerts and see how the Emanuel flute blends and projects with the orchestra in different acoustics and from different distances and angles. This is a kind of research that helped me to understand the role of the flute in the music repertoire, how it blends with the orchestra, the dynamics, and try to find a right headjoint combination and a wall thickness to create a perfect instrument in many ways.

I also like to listen to the flute repertoire and great flute artists, playing the flutes of other makers.

Before coming to Zurich, I visited the Salsburg Music Festival, where I met with my very good friend and client Karl-Heinz Schütz, also with Wolfgang Breinschmid, VPO flutist and good friend, and Daniel Froschauer, VPO Chairman. I also listened to Vienna Philharmonic’s concert with Arthur Honegger, Symphony No.3 and Johannes Brahms, Symphony No.4 in program.

Music and art always play a big part in my life.

Sofia: Do you consider to have an apprentice to pass your knowledge and vision?

Emanuel: As of now, I have not come across someone, who has time and a will to spend a big part of his life, dedicated to a proper apprenticeship. Also, the time, required to be spend with an apprentice would be very limited and costly, because it will take me away from making the flutes and headjoints.

Sofia: Emanuel, thank you so much for your time and such an interesting conversation! Today I finally got a chance to try your flute for the first time and it was a love from the first sight. An incredible instrument!

Congratulations again on the 30th anniversary of your brand and wishing you all the best in your work!

Emanuel: Thank you very much, Sofia! I appreciate your time and effort in putting this interview together. I really enjoyed meeting you and your wonderful flute playing!

The Russian-Swiss flutist Sofia de Salis has received international recognition and has established herself as a soloist with exceptional musicality and rare sound quality. She is a sought-after guest artist at international festivals such as December Nights (Moscow), Festival de la Côte and Stars on the Rhine (Basel). Sofia recorded two albums, which received excellent reviews from listeners and critics. Her master classes and live broadcasts on social networks have incredible popularity and a huge number of subscribers.

5 thoughts on “A 30-Year Anniversary of Emanuel Flutes”