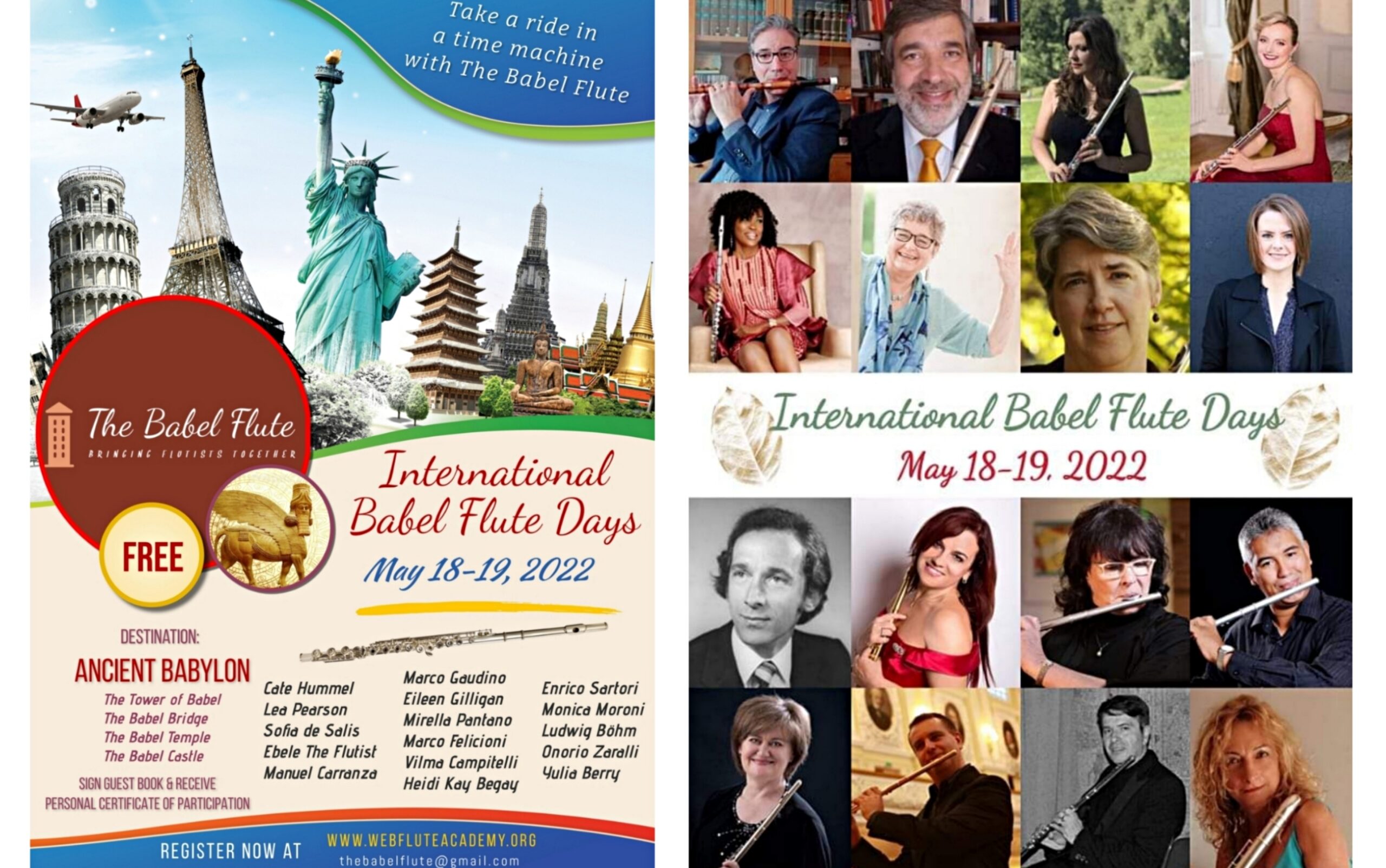 Since the launch of The Babel Flute project on March 20, 2021, over 75,000 people from 136 countries have visited the platform in 15 months (according to Google Analytics).

Since the magazine is purely for flute players and narrowly focused on flute topics, this is an absolutely incredible result, which also reflects the huge interest and demand for this project among flute players in many countries. Thanks to the powerful and very high-quality translation function, the magazine can be read in more than 100 languages, erasing any language boundaries.

To celebrate the first anniversary of our flute unity and success, in May 2022 we held “International Babel Flute Days” for the first time! The event was free and took place at the Web Flute Academy, the parent company of The Babel Flute.

On May 18 and 19, 2022 we took a ride in a time machine and walked together through Ancient Babylon, visiting its famous sights: the Tower of Babel, the Babel Bridge, the Babel Temple and the Babel Castle.

There we met dear friends from all over the world who came to celebrate the unique Babel Flute project! We had 98 guests from many countries!

The music for the event was written by our dear friend Manuel Carranza Cueto, a famous composer and flutist, regional director of The Babel Flute for South America and its active contributor.

Watch the video below:

The International Babel Flute Days kept doors open for a whole month after the event.

Onorio Zaralli
Founder of Web Flute Academy, The Babel Flute and Scuola Flautistica Italiana, flutist, professor, writer, composer, innovator. President of The Accademia Flautistica Veneta, Padova. Italy
Yulia Berry
Founder of Web Flute Academy, The Babel Flute and New England Flute Institute, flutist, DMA, independent educator, writer, publisher, mobile app/web/e-learning developer. USA
Sofia de Salis
Internationally recognized Russian-Swiss flutist, Laureate of international competitions. Recording artist at ARS Production: "French Impressions" (2017) and "Shades Of Love" (2019) Russia / Switzerland
Manuel Carranza Cueto
Internationally recognized Peruvian flutist, recording artist and composer, whose works were premiered in many countries, including Peru, USA, Brazil, Paraguay, Serbia, and others. Educator, author of many publications. Peru
Heidi Kay Begay
Dr. Heidi Kay Begay is the founder of the Flute 360 podcast, which can be found through various podcast apps, such as Apple, Spotify, iHeart Radio, Amazon Music, and more.  Heidi teaches digital courses, coaching sessions, and private music lessons. In addition, she provides musicians with audio and video production needs for their creative projects. USA
Lea Pearson
Dr. Lea Pearson has been helping musicians find relief from pain and learn effective ways to move and play since 1998. One of the country’s leading Body Mapping Educators, she works with professional and amateur musicians and trains teachers how to use our bodies to make beautiful music. USA
Enrico Sartori
Italian conductor and flute player. Flute professor, conductor and vocal coach at Northeast Normal University (China). Main conductor of the Jilin Baroque Youth Orchestra and artistic director of Bella Culture Media, ltd.  Italy - China
Ebele The Flutist
Ebele has been recognized as the first and foremost female flute player in Nigeria and has received many awards. She hosts a talk show called #LetsTalkWithEbele and is involved with an organization called Ebele's World. Nigeria
Eileen Gilligan
Eileen is the Founder of "The Flautist", a platform that delivers the resources for the flute with guides for each piece and tools to assist with the challenges faced by flute players, as well as an understanding of the piece and composer and the era it was written. Australia
Cate Hummel
Dr. Hummel performs as an Altus and Azumi flute artist. She is founder and director of Dr. Cate’s Flute Camp, a day camp for flute students based in the Chicago suburbs. She is Adjunct Professor of Flute at the University of St. Francis and teaches privately both in person and online. USA
Marco Gaudino
Neapolitan flutist and researcher, MIUR flute teacher. Author of works: "New hypothesis on the production of sound in the transverse flute" and "Suono Pensando", holds seminars in Italy and abroad. He is the author of software for flute teaching and of a device that optimizes the sound quality of the flute. Italy
Mirella Pantano
Mirella Pantano is a soloist in symphonic and television orchestras, including “La corrida”, “Domenica In”, “Concerto di Natale 2009” and many others. She is the author of countless musical fables, including staged "ANOTHER SKY" and " IL BOSCO PRODIGIOSO ” and producing educational CDs. Italy
Monica Moroni
Monica Moroni is a flutist with extensive international experience as a soloist and chamber musician, laureate of international competitions, and an active popularizer of contemporary music. San Marino
Vilma Campitelli
Flutist and researcher, teacher at the “U. Giordano ”of Musica di Foggia, sect. of Rodi Garganico, Italy. Author of the first universal work on the flute repertoire written by composers Compendium Musicae Flauta (ed. Smasher) Italy
Marco Felicioni
Marco Felicioni, flutist, carries out an intense activity in Italy and abroad, performing alongside internationally renowned artists. Researcher and collector of historical and ethnic flutes for thirty years, he is the author of historical-didactic articles and regularly holds instrumental and musical interpretation courses.   Italy
Ludwig Böhm
Ludwig Böhm is a great-great-grandson of Theobald Böhm (flautist, composer, flute-maker, inventor of the Böhm flute, Munich 1794–1881), who dedicated his life to keep the memory of Theobald alive. He is the President of the Theobald Böhm Archive, the Theobald Böhm Society and the Theobald Böhm Foundation. He is the organizer of the International Theobald Böhm Competition.   Germany

On Day 1 we first met at the famous Tower of Babel. In the categories “Analysis & interpretation”, “Playing in concert”, and “Career & management” our speakers had the following presentations:

After the Tower of Babel we moved to the Babel Bridge with the categories “Composers & biographies”, “Ensembles & repertoire”, “Flute history”, and “Ethnic flutes” and the following video presentations:

On Day 2 we met at the Babel Temple, where our speakers presented topics in the following categories: “Contemporary music”, “Artificial intelligence” and “Flute making & repair”:

Then all guests were cordially invited to the Babel Castle to watch video presentations and discuss topics in the categories: “Pedagogy”, “Flute technique”, “Physiology”, and “Children education”.

Day 2 ended with a live session, where our speakers answered why they chose their topics for the video presentations.

All participants of the live session received a special free gift: The Babel Suite by Onorio Zaralli for flute quartet, written by Onorio Zaralli to celebrate the anniversary of the first year of the Babel Flute!

The Babel Suite begins with disharmony. The voices of the flutes go through individual paths of development, sometimes arguing and disagreeing with each other, but merge in perfect harmony at the end of the Suite. It symbolizes the triumph of unity while remaining unique.

The idea of the Suite reflects the idea of the Babel Flute to turn the history of the Tower of Babel around, calling instead of disunity, rejection and misunderstanding  to unite in the beautiful art of playing the flute, despite any differences, help each other and interact in harmony.

Day 3: After the party

We received a wonderful feedback from our guests:

Personal certificates of the participants:

International Babel Flute Days were very interesting and passed with incredible success. They were filled with a huge amount of interesting and useful information and allowed us to simultaneously get in touch with the unusually interesting history of Ancient Babylon, which gave the name to our project.

We want to thank our speakers and guests for making this event unforgettable!